NBC Sports’ Ricky Carmichael has been settling into his new gig nicely calling the 2019 Monster Energy Supercross from the booth this year. We will get his off-camera perspective on the awesome racing and the quickly approaching 10th Annual Ricky Carmichael Amateur Supercross at the Daytona International Speedway. Hard to believe it has been 10 years already, but we’re stoked to have been a part of this awesome event since its inception. Check out www.RaceDaytona.com for more information and we hope to see you there!

Monster Energy Pro Circuit’s Austin Forkner had a far too exciting day leading up to the 250SX East opener in Minneapolis last weekend but won convincingly with the holeshot and leading every lap. Austin is always an entertaining interview and we look forward to his take on the racing and everything else in his crazy world.

Jeff “6-Time” Stanton has been surviving the Michigan winter as only the “Rocky” of motocross would by keeping his regular fitness and farm schedule regardless of the insanely cold conditions. We hope he thaws out a little when he heads to Daytona while racing multiple classes in the newly added Daytona Vintage Supercross at Ricky’s race this year. We will get his thoughts on all of that and his always honest opinions on the new supercross racing so far.

We caught up with Ricky Carmichael for his take on the upcoming 2019 Monster Energy Supercross season, Motocross des Nations, the James Stewart riddle and when we might see him racing Jeremy McGrath soon. Always a pleasure catching up with the GOAT!

We always enjoy having Ricky Carmichael on the show leading up to the Monster Energy Supercross season with his unique perspective as a five-time champion and on-track reporter again this year. We’ll get his thoughts on the field, new rule and venue changes and whatever else the GOAT wants to throw into the mix. We’ll also get the latest on the Ricky Carmichael Amateur Supercross (RCSX) which returns to the Daytona International Speedway this March for the biggest two-day amateur supercross event in the world.

Racer X’s Davey Coombs is already in Anaheim and will give his final thoughts before we drop the gate on the 2018 Monster Energy Supercross season this Saturday night!

David Pingree has been heroically fighting the historic California fires beside his brave fellow firefighters for many weeks in between his other moto duties. We’re glad things have finally been contained out west and we look forward to catching up with Ping tonight.

Barrett Sallee is a college football writer/analyst for CBS, ESPN and an actual Heisman voter, but also loves Supercross and our show for some reason. We have a ton to cover tonight with the College Football Playoff National Championship and Anaheim 1 going down within two days of each other.

Make sure you sign up with MotoDynasty for your fantasy supercross racing this year. They have an incredible new site and fantasy options for every level and style of player. Join the DMXS division for special prizes and shout outs on the show. Go to www.motodynasty.com now and try to redeem your horrible fantasy football season.

Letters to home by, PFC Ricky Carmichael His accounts from his Career 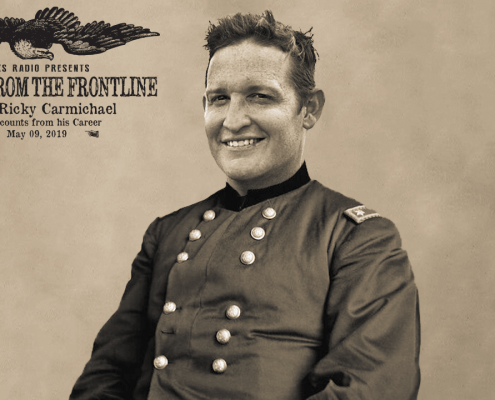